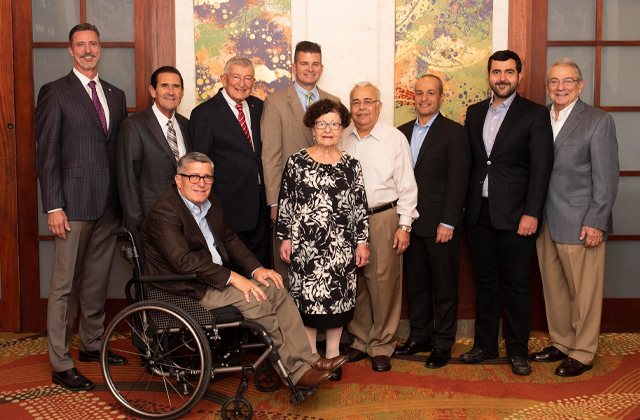 Texas Independent Bancshares and Texas First Bank are pleased to announce the selection of Arpi and Zohrab Tcholakian for the prestigious Howard O. Payne Award. The Tcholakians modestly started Phoenicia Deli on Westheimer Road thirty-five years ago. Since then, the company has grown to three locations and the Tcholakians continue to show significant economic leadership in the Houston area.

The Howard O. Payne Award was instituted in 1973 to honor Mr. Payne, a lifelong businessman, who moved to Galveston County in 1957 at the age of 74. Five years later, he helped found First State Bank of Hitchcock and worked there six days a week until the age of 93, earning him the unofficial title of “World’s Oldest Active Banker.”

In celebration of his 93rd birthday at the bank, Payne told his well-wishers, “I have no plans for retirement, since I work a six-day week because I find banking an exciting business.” Mr. Payne was still employed full-time when he passed away on July 8, 1977, at the age of 94.

First State Bank of Hitchcock, now Texas First Bank, is proud of the communities and people it serves and established this award in his honor to annually recognize a citizen or group of citizens in the bank’s market area who are leaders in the development of the community. Over the last 43 years, the award has been given to several influential figures from many different backgrounds and industries in Houston, Galveston and beyond, including Walter Hall (1973), Emmett F. Lowry (1977), Tilman Fertitta (1996), Lawrence J. Del Papa, Jr. (2010), and Robert L. Moody, Sr. (2014). This year’s honorees, Arpi and Zohrab Tcholakian, fit right in with the group, having shown true leadership in their grocery/import business, as well as building up our community.

Arpi and Zohrab Tcholakian with their three children narrowly escaped the civil war in Lebanon, planting roots in Houston in 1979. Zohrab originally found a position as an architectural engineer with Bechtel Corporation soon after arriving, but convinced Arpi a few years later that it would be best for them to pursue their passion for food instead of waiting for the lay-offs headed for the oil industry.

As a result, in 1983, the couple opened Phoenicia Deli, a 2,500-square-foot Mediterranean-style delicatessen and grocery, on Westheimer Road in West Houston. With a passion for food in Zohrab’s blood and Arpi’s organizational skills and love for feeding people, the Tcholakians were determined to create a loyal following, despite the economic downturn. Phoenicia Deli still flourishes as a restaurant just across the street from where it originated and is now called Arpi’s Phoenicia Deli, after the matriarch of the family.

In 1992, Phoenicia Deli leased a space to store the many imported goods they were receiving. Soon, retail and wholesale customers started going to the storage space for a case of their desired, hard-to-find specialty items, and eventually this grocery storage space became a specialty foods market. So, in 2006 Phoenicia Specialty Foods was born, a now 100,000-square-foot international food market adjacent to the deli. The enterprise has continued to grow with the addition of an urban 28,000-square-foot retail market in downtown Houston.

Among many honors, Phoenicia Specialty Foods has been named one of the Top 10 Food Markets in the United States by Saveur magazine, and My Table magazine has named Phoenicia Best Grocery Store. Travel host Samantha Brown has mentioned Phoenicia in her PBS show Places to Love.

All three of Arpi and Zohrab’s children contribute to the growth of Phoenicia Specialty Foods by adding value through their talents. Phoenicia Specialty Foods has captured a niche in the specialty food business and has become an establishment Houstonians are proud to call their own. Arpi and Zohrab still work every day and love what they do.  They contribute generously to the community and cherish the relationships they have made along the way.

Texas Independent Bancshares and Texas First Bank congratulate the Tcholakians on receiving the 2017 Howard O. Payne award and thank them for their continual economic and community-driven leadership.